The Fall of the Huronia - One side of a multifaceted piece of history.

This video shows but one perspective of the history of Huronia. There is much to be read and studied and each of us have the opportunity to draw our own conclusions.
The Huronia Chapter of the Ontario Archaeological can assist you in your research and attempts to use archaeology as the forensic science of history.
Get involved and rediscover the historic routs of Huronia.
Posted by John Raynor at 4:25 pm No comments:

Stories of Ste. Marie - a reading at the Midland Public Library 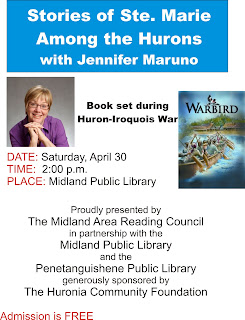 Posted by John Raynor at 3:50 pm No comments:

The Ste. Marie Collection At the Midland Public Library

There has been a Library in Midland for almost 130 years. For over a hundred of those years it has called only two buildings home – the Carnegie Library on Hugel and the old Post Office on King. This relative stability allowed the Librarians to gather an historical collection that concentrated on local history but also included such things as the Champlain Society publications, now an extensive and valuable collection of Canadiana, and a complete collection of The Jesuit Relations, also relatively hard to find. This material was catalogued, in Dewey, by Library staff as acquired.

Archaeobotany talk by Fecteau was a rich visual show

Today this post has two phots for its initial publication.  Though the week more photos will be added. 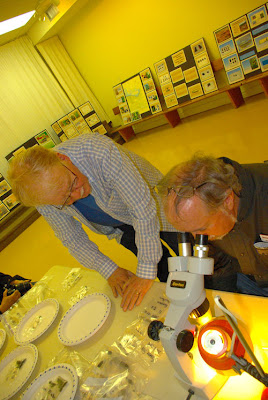 Rudy Fecteau standing and Jamie Hunter at the microscope at the simulated lab setup. 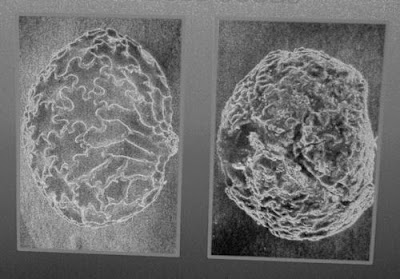 Modern (Left) and archaeological (right) tobacco seeds, from one of the 3'x4' poster information panels 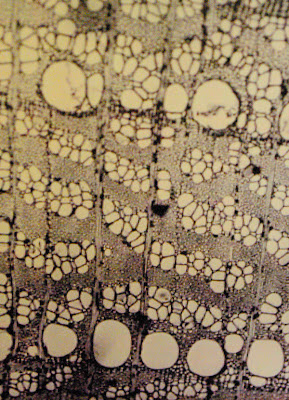 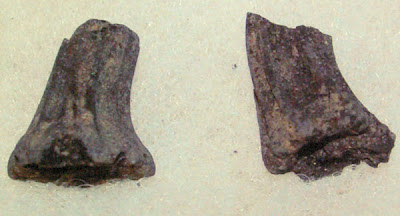 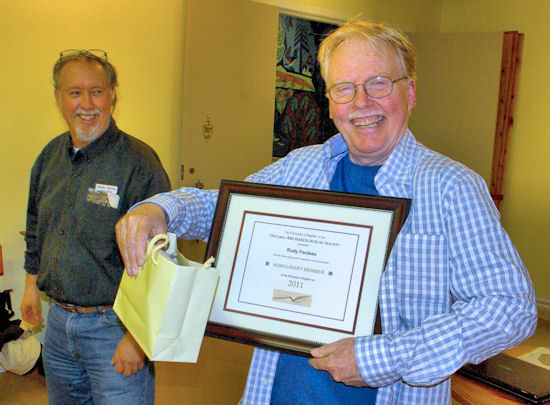 Rudy Fecteau Receives gifts from the Huronia Chapter of the OAS

Otoüacha was most likely the port that served the communities of the Bear Nation (Attignawantan) of the Wendat Confederacy that inhabited the northern peninsula of what we now know as Tiny Township. When we take Champlain’s last seven leagues into consideration I place Otoüacha somewhere between Sawlog Bay and Cedar Point most likely just east of Methodist Point near the beaches of Awenda Park. Methodist Point would have been a prominent landmark and provided a sheltering break from the prevailing northwest winds of this area. It is obvious from some translations of this name (ref) and later historical references (JR-Brebeuf) that this port served more than one village and was not in itself a village. Champlain seems to have viewed the landing place and the village as one place but this is probably incorrect as it was the practice of the Wendat to build their villages inland from the shore as they were an agriculturally based society that took advantage the vast plateaus of sandy loam that exist all over northern Simcoe County to plant their corn and other crops.


“…we arrived in the country of the Attigouautan at a village called Otoüacha on the first day of August. Here we found a great change in the country. It was here very fine, the largest part being cleared up, and many hills and several rivers rendering the region agreeable. I went to see their Indian corn, which was at that time far advanced for the season.”

From Otoüacha we assume that Champlain was taken up the ridge to the village of Toanche that was a short distance inland and known today by archaeologists as the Gwynne site (BfHa-1a). If you have walked the trails of Awenda Park and followed them down to the beach you will most likely have walked through the village of Toanche and the land on which Ontario’s first European tourists spent their first nights.

(copied from a yet to be published booklet - "Champlains' Guide to Huronia")
Posted by John Raynor at 1:21 pm No comments:

Email ThisBlogThis!Share to TwitterShare to FacebookShare to Pinterest
Labels: Toanche

Indian Myth and Magic on the Blue Mountain

It is time to find Toanche.

One of the first articles on this blog asked the question “where is Toanche?”
That was back in 2006.

Some 5 years later now and the question has only become more urgent. Toanche was the first Wendat village to be mentioned by Champlain shortly after his arrival in Huronia in August of 1615. It was the first village to welcome him and his entourage and where he stayed 2 nights before being given a tour of the Bear Nation’s homeland which was largely contained within what is now known as Tiny Township at the northern tip of Simcoe County.

It is anticipated that in 2015 Huronia will host numerous celebrations and commemorations with events taking place in many of the communities of North Simcoe and beyond as was done for the 350 anniversary of Champlain’s arrival. Along with these events there is a desire among some groups to leave behind a lasting legacy to Champlain and the events that took place here. There is talk of a Champlain Huronia Centre. This centre is envisioned to provide a focal point to symbolize Champlain, Huronia and New France as vital components of Canada’s heritage.

This is a huge undertaking and the group organizing this venture will be looking for a site to build this legacy to Champlain.

As the Huronia Chapter’s president I have participated in discussions with this group and attempted to emphasize the importance of getting it right, telling the story of Champlain and his purpose for coming here and building whatever legacy project in place of historical significant. At times I feel that I am speaking to deaf ears as this group seems to be more driven by tourist interests than historical accuracy. Ironically, the ministry that funds tourism and the one that funds heritage interests, archaeology and museums is one and the same, The Ministry of Tourism and Culture and as the name might imply, tourism comes first. Tourism is seen as a positive cash flow while the rest are seen as negative cash flows so understandably heritage interest, archaeology and museums have a much harder time getting their fair share of the public purse.

This being said, when proposing question of historical integrity and archaeological accuracy in support of that integrity one feels that they are swimming upstream. To complicate this, despite 150 years or more of archaeological work in Huronia we can not say with certainty what many of our important sites represent or more to the point, what was the name of the village that once existed here. Hence when asked “where was Toanche?” I must answer that despite what my opinion may be, the historical and archaeological community cannot speak with one voice and the record would show that various learned opinions place Toanche in at least half a dozen different places. (see list in 1st comment)

When called upon to give “expert” advice and attempt to persuade others to get it right this time I find the historical and archaeological community lacking in being able to prove its case. This is not because we lack the science or skill but sad is to say perhaps the interest is where we fall short. Each researcher wants to fall on their sword rather than work in a collaborative manner in the search after truth. This compounded with lack of sufficient funding means that we cannot effectively function in forums where “expert” advice can be given.

Can we change this? Can we as historians and archaeologists put our collective heads and knowledge together and come up with conclusions that will represent answers based on the best that science can offer today or do we wish to go silent and have our communities continue to use 100 year old science when portraying our history and placing their monuments.

So I will say again “Where is Toanche” – we need to find it before another 100 years goes by bookmarked by inaccuracies in archaeological identification or histories that are representative of fairytales.
Posted by John Raynor at 7:02 pm 1 comment:

Email ThisBlogThis!Share to TwitterShare to FacebookShare to Pinterest
Labels: Toanche

I have been asked once again for my opinion on the location of Ste Ignace II and here is my reply copied from a recent email.
As to Saint Ignace II – Its purported location in the NW ¼ of lot 5 Con 9 of Tay township that was dug by W Jury is still given little to no credibility by the archaeological community here. The Shrine still maintains its authenticity but they appear to stand alone in their opinion. They continue to take pilgrims there, do Mass on the site and hold relics at the Shrines Museum that have come from the site. There is no longer any Federal, Provincial or other historical markers or signage related to the site.

"I believe that the site is much closer to Ste Marie – perhaps on the Newton site (W 1/2 lot 11 Con 6 of Tay) as argued by A F Hunter in his report. This is now marked and supported by many as the site of St Louis but Jury’s report is also suspect here in my opinion.
In conclusion – if you ask me, a well documented, archaeologically supported location for the Saint Ignace site of March 1649 has yet to be determined."
Any further insights that our members or other readers of this blog may with to add would be greatly appreciated.
Posted by John Raynor at 12:48 pm 1 comment:

I have been notified by the Township of Severn of a pubic meeting take place at the township office April 21st 2011 regarding a proposal for a new 137 lot subdivision on lots 5 & 6 Con 11, Severn Township (old North Orillia twp).
My database does not show any archaeological sites on these lots. Should anyone have any information regarding sites on these lots please let me know or contact the township directly.
(David Parks, Director of Planning & Development, 705 325-2315 - email- dparks@townshipofsevern.com
Posted by John Raynor at 6:16 pm No comments: