I went to view the “Powell” collection that is now in the possession of Trish (Powell) and John Hartman at their home in north Tiny. Bill Gibson came with me to photograph the collection (some inserted below) and John Hartman was kind enough to forward me his photos (overview attached). While we were there John Powell showed me an axe collar that he had recently found on the property and gave me a property survey that shows where some of these items where reported found by Mr. Powell Sr. between the late 60s and 1980s. The Powell farm is located on the N ½ of lot 16 Con 7 Tiny township and is now divided in 2 (upper and lower lands primarily) and owned by Mary and Joan Powell respectively along with their spouses.

It is on the upper lands above the ridge that a Bell communications tower has been proposed and this is the same part of the farm that most if not all the artifacts were found by Mr. Powell Sr.
Although numerous finds have been reported on this lot and those adjoining it by people like A F Hunter, Ken Kidd, Frank Ridley, J Hunter, A Hawkins etc. no systemic archaeological study has been done to my knowledge that sheds sufficient light on the chronological migration of the village population of Ossossane over these acreages. We know that various generations of these villages were visited by such figures as Champlain (1615-16), Segard (1623-24), and Brebeuf (1635-39) as recorded in the primary source documentation left behind by Champlain, Sagard and the Jesuits.
What lead me to view the “Powell” collection was the concern raised when I was advised that a communications tower was proposed for this lot and that Industry Canada (the federal oversight body) did not require that an archaeological assessment be carried out by Bell nor does the local municipality have a consultative process put in place that might have involved more stakeholders than those indicated by Industry Canada whose default possession is properties with 90 m of the tower base. Bell has since agreed to do an archaeological assessment but I am not yet sure just how much ground will be covered or what the outcome of the assessment will be but I am sure that this land can yield far more historical evidence than it has to date and I would hope that once this assessment is complete and the results known the archaeological community will make further efforts to map out the district of Ossossane’s place in history. 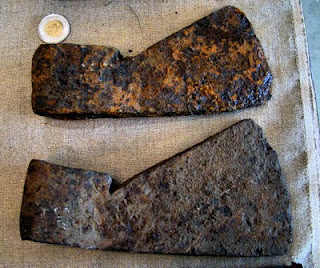 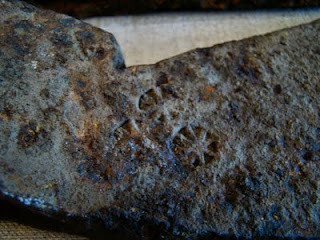 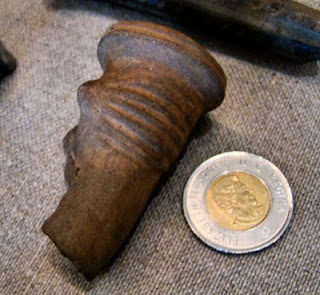 Hi John ~ Can you tell me what came of this? Did Bell actually do an archaeological assessment, and was anything found, or?

Bell backed off and put the tower somewhere else or shared a nearby tower with Rogers & Telus.
The cost of an archaeological assessment can be substantial so after showing them the collection and some PR work they thought twice about their plan.