Some interesting developments in Orillia.

The discovery of First Nation remains, believed to be hundreds of years old, won't stop developers from moving forward with a multi-million dollar gated community in Cumberland Beach.
Summerhill Homes plans to go ahead building the 78-unit West Shore Beach Club once the remains are dealt with according to the law, said the developer in charge of the project.
"We are absolutely continuing on; we just have to hold off," developer Brian Ellis said. "Out of respect, you have to make sure the (authorities) come and certify that the area is cleaned up.
"These (bones) are like hundreds and hundreds of years old," he added. "You always have to follow policy with that kind of stuff. You don't fool around with that kind of thing."
The remains were discovered in Severn Township Wednesday morning during site preparation for the project, located at the corner of Turnbull Drive and Third Avenue, on the former Bramshott Farm.
An investigation is currently being conducted with Michael D'Mello, a registrar from the Ministry of Consumer Service, Cemeteries Regulation Unit, and archeologists, hired by Summerhill, who are looking to determine the origin and extent of the burial.
"The site appears to be an ossuary containing several aboriginal remains. The registrar has notified the appropriate First Nations communities of the discovery," Sue Carroll, spokesperson for the ministry, wrote in an email to The Packet Friday.
She could not confirm which First Nation the remains belonged to.
While Summerhill currently has pre-servicing draft approval for their project, the final OK to start developing the homes won't be given until the proper authorities sign off on how the remains are dealt with, said David Parks, Severn's director of planning.
"We are here to make sure that the regulations of the Cemeteries Act are followed to the tee," Parks said. "That may include altering their original plans."
Once the archeologist determines the origin and extent of the burial site, the First Nations representatives and the land owner must come to an agreement about final disposition of the site and the remains, as outlined in the Cemeteries Act.
"The site may be established as a cemetery or the remains may be re-interred in an existing cemetery, in accordance with the decisions made in the Site Disposition Agreement by the parties involved," wrote Carroll.
More than $3 million has been invested by Summerhill, in land purchase and plan developments, to date, Parks estimated, with tens of millions more planned in investment.
"It is not unusual, if you check history of development, you'll find that (finding remains) happens all the time," said Ellis. "That is actually quite normal in the Muskoka or Orillia area. It is not unusual at all."
mminassian@orilliapacket.com 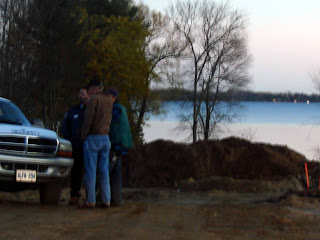 I took a road trip over to the site with and Gary late Friday afternoon and the security guard informed us the ASI was the CRM on site. I am not sure if this is a new site or one that is already known about but it dose not show up in my database so it is new to me. I am not sure if an archaeological assessment was done or requested for this subdivision (one may have been done and the burials missed) but it is interesting to note that the developer has stared to dig the ground before final approvals were given?
Posted by John Raynor at 12:24 pm

Sources indicate that this is a new site, Huron by culture and will most likely be protect on site.