The Twelfth Night in Huronia

Could it be that the French in Huronia celebrated this festive eve with a song or at least a variation on the lyrics of a song we use today.
http://en.wikipedia.org/wiki/The_Twelve_Days_of_Christmas_(song)#Origin 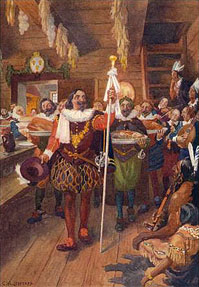 There is a good possibility that the lyrics originated as part of a game from France much earlier than the English version that we are familiar with.The version that I think might have been used here would be;

"La Foi de la loi," and is sung "avec solennite," the sequence being: a good stuffing without bones, two breasts of veal, three joints of beef, four pigs' trotters, five legs of mutton, six partridges with cabbage, seven spitted rabbits, eight plates of salad, nine dishes for a chapter of canons, ten full casks, eleven beautiful full-breasted maidens, and twelve musketeers with their swords.
I can just imagine the French wintering over with the Wendat in Huronia conjuring up the visions that this song might depict. If the "Order of Good Cheer" was adopted here, this might have been one of their favoured past times.
Posted by John Raynor at 3:52 pm