Carhagouha - Do we know where it is?

I received a letter from Rev. Bernard Carroll, S.J., the director of the Martyrs' Shrine, in which he asked about Carhagouha "As successors to those first missionaries, we present-day Jesuits are very interested (from a Catholic perspective) in finding the actual Carhagouha site where the first recorded Mass took place and at which Champlain was likely present.  Finding conclusive evidence would be, I am sure, a challenging task."

It has been long assumed by local residence and tourists alike that Carhagouha (the site of the first recorded Mass in Ontario according to Champlain's journals) is located in a field marked by a couple of crosses northwest of the village of Lafontaine in Tiny township. (if you search this blog you will find at least 4 additional posts regarding Carhagouha). 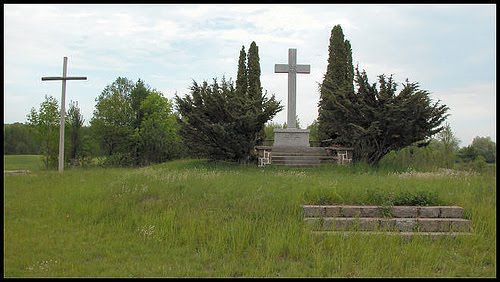 
Is this the actual site of the Huron/Wendat village visited by Champlain in August 1615? What evidence is there to support the claim made by A E Jones, S.J. in his book "Old Huronia" (1908) that this village was on lot 20 con 17 of Tiny township where this site now marked as above?

It is my hope to explore these questions and others related to this subject at our next Huronia Chapter meeting at the Huronia Museum Thursday March 8th starting at 7PM. Hopefully we can move to vindicate this site as the correct location or find suitable new candidates for the location of this historically significant village.

Posted by John Raynor at 2:07 pm No comments:

David's enthusiastic interest in all things historical and his zest for learning always provided a breath of fresh air to our group. His crafts in which he replicated artifacts of the past are true works of art and are inspirational to those seeking a better understanding of the way we were. His passion for understanding the Aboriginal way of life is reflected in his art and will remain as part of his legacy.
I only wish that we had been able to share in the building of that birch bark canoe that he so desired to create - have a good voyage my friend.
John Raynor
President
Huronia Chapter of the Ontario Archaeological Society
http://www.steckleygooderham.com/obituaries/David-Lamb/

Photo of some of David's work by William Gibson

British Archaeology in its January February 2012 issue has an interesting article in the Spoilheap  department entitled: “Metal Detecting, ban or befriend: the evidence”.

This article looks at the effect of the Portable Antiquities Scheme.  “The premise of the scheme is that voluntary regulations, free, informed advice and national recording of metal detector finds are better for archaeology than laws which ban collecting.”

Read more »
Posted by Gibson, William at 3:17 pm No comments:

http://midlandmcpiworkshop.eventbrite.ca/
The above link will take you to the details and registration info for the Municipal Cultural Planning Workshop being hosted by Midland March 21st at the North Simcoe Sports and Recreation Centre next to the Huronia Museum.
This workshop may enable us to raise the question of archaeological site preservation and the need for archaeological master plans as part of the cultural planning process.
I am looking forward to seeing what is presented and participating in the process if it is deemed appropriate.


Dayle Elder has generously agreed to make a presentation at our February 9th 2012 members meeting. His topic: "8 Weeks in the Nam: The Archaeology of the Namewaminikan River." He will focus on archaeological research conducted on the Namewaminikan River and Lake Nipigon from the 1980's until the present time, including the work he did this summer on the archaeological sites Twin Falls I (DkJa-7) and Twin Falls II (DkJa-8). Dayle Elder's talk is open to the public.  The chapter business meeting which follows his talk is open to chapter members only.


Discovery a glimpse into a ‘completely different’ life

Life on the shore of Lake Couchiching was dramatically different 500 years ago for the First Nations communities that inhabited the area.
This was a place covered in golden cornfields as far as the eye could see — an idyllic spot dotted with villages across the region that each supported about 1,500 inhabitants.
That long-forgotten part of northern Simcoe County’s past was brought back into the light after an ancestral Huron ossuary was discovered Nov. 2.
The bones were discovered buried together in a circular pattern, said chief archeologist Ron Williamson, who was sent to the area to identify the bones and their current descendants.
“They are ossuaries, which are Huron-Wendat features,” he said. “They are the folks in that area that buried their dead in pits (where burial took place after the grave’s initial construction).”
Unearthed during the development of the West Shore Beach Club in Cumberland Beach, the Wendat bones hint at a community long-since forgotten; one whose history played out before European settlers arrived.
“When the Jesuits arrived in Huronia in the 1600s, they would get lost moving from one village to another, but instead of being lost in the forest, they were lost in the cornfields,” said Williamson.
“It is a completely different life to have to imagine.”
In the matriarchal society of the time, life and labour were divided down gender lines. While women tended the massive expanses of cornfields, did the sewing and reared young, men would hunt, fish and clear the forests of wood, said Williamson.

The following link will take you to CBC radio one broadcast aired this AM re the Shrine vs Midland.