British Archaeology in its January February 2012 issue has an interesting article in the Spoilheap  department entitled: “Metal Detecting, ban or befriend: the evidence”.

This article looks at the effect of the Portable Antiquities Scheme.  “The premise of the scheme is that voluntary regulations, free, informed advice and national recording of metal detector finds are better for archaeology than laws which ban collecting.”

Raymond Karl an Austrian archaeologist provides some evidence in an article published in the Oct. 2011 issue of The Historic Environment: Policy & Practice (“On the highway to hell: thoughts on the unintended consequences for portable  antiquities of S II(I) Austrian Denkmalschutzgetz"). 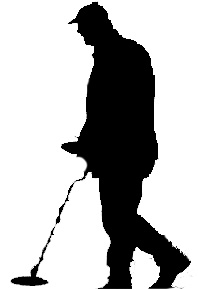 He compares two situations:  voluntary (England and Wales) and mandatory reporting with restrictions (Austria).  In Austria you must report any discovery in two days and may not dig without an archaeology degree.  In Austria only licensed archaeology graduates can use metal detectors.

Some numbers to consider:  in Scotland where reporting is mandatory the number of treasure reports remained stable over the past 15 years (200-300 annually). In Austria in the same period the number of reports trailed off slightly.   There is a marked difference after the PAS came into effect in 1997. In England and Wales numbers rose from 20 to over 800 annually. In 1998 the number of all reports in England and Wales rises to over 1,000.  Within two years of introduction, the number went to 10,000. Then over 20,000 early in 2000 and over 40,000 in 2009.  “In 2010 there were 48,749 portable antiquities reports (all voluntary) detailing 90,099 finds; additional figures for treasure reports for 2010 were not yet available.”

This raises all kinds of questions. What is behind the enormous difference in reporting numbers. And one answer that isn't found, with voluntary reporting how many artifacts are "disappearing" into various private collections , some for cash.

In Austria it seems that before the law was introduced most reports were by amateurs.  Now they have gone underground.  Karl estimates that there are 2,000-3,000 metal detector hobbyists. His research shows that most metal detector enthusiasts would like their hobby to be legal so they can report their finds not so they can sell their finds.

Spoilheap concludes open reporting should be adopted, but adds that “The law-breaking, abusive minority of English and Welsh detectorists, however, should be exposed and stopped. They poison the atmosphere for everyone.”

I wonder how these numbers add to the question of metal detecting and archaeology in Ontario.