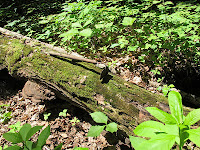 On a tip from an acquaintance, Gary Dubeau of our chapter located a previously unfound  site in a county forest. Gary spotted what looked like a midden on the far side of a creek and upon further investigation located sufficient artifacts to confirm the midden and hence the existence of a site. Unfortunately the site has been partly looted. Gary asked if I knew of a site in that location and after a search of my database I was not able to confirm any site within the county forest. While there are sites in the vicinity, this site appears new. Gary took Marg, Jamie and myself to the location and while Jamie first thought that this was BeGx-9, upon arriving there he said that he knew it as the Williams site but had never found it. As follow up, I advised Dr Alicia Hawkins of the site and after conferring with the ministry confirmed that it is a new non registered site. Alicia and I visited the site, GPS'd the location and confirmed the presence of sufficient artifacts to proceed with bordenizing the site.
Some comments from Alicia to the ministry: 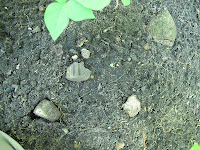 .
"I am attaching several photos I took of an unregistered site in north Simcoe that is being looted. There were backdirt piles along the embankment, a number of holes, all of them along the edge of the creek, and even a hoe! Judging from the growth of vegetation on the backdirt piles, the activity has been recent, but not very recent. Like maybe last fall.


The site is village sized with deep middens. I didn't see any trade goods and all we did was a walk-over, so there was not a whole lot that is diagnostic, but I would say it is Huron-Wendat - contact or precontact.
I have mostly filled out the Borden form, which I will fax to you. The site is owned by Simcoe County - it is in a Simcoe County forest.
The Huronia chapter is considering doing a public arch day aimed at screening the backdirt piles and attempting to stabilize the banks, if we can get the permissions. This would be for mid August."


Congratulation Gary - good eye and thank you Alicia for the interest and follow up.
Stay tuned for updates.
Posted by John Raynor at 1:04 am