from Historic Sites of Tay by Andrew F. Hunter, M.A., reprinted from the Author’s “Notes on sites of Huron Villages in Tay” with Additions, Barrie Ontario, 1911. Bulletin of the Simcoe County Pioneer and Historical Society, November 1911, pp. 13-16

The position of St. Ignace has been an open question for many years. As at least half a dozen places had been suggested, the writer, in 1899, visited all the Huron village sites within reasonable distance of Ste. Marie on the Wye, and after carefully considering the question in all its bearings, arrived at a conclusion substantially as follows. 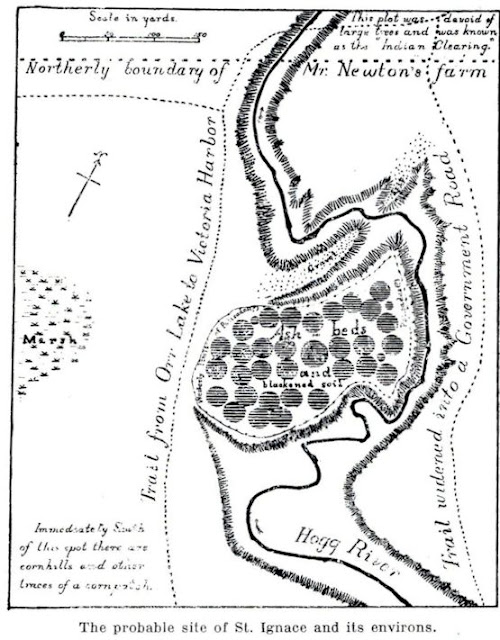 The physical features of the land governed the courses of the forest trails of the Hurons. The,continuous high ground, along which trails could pass, makes its nearest approach to the Georgian Bay at the head of Victoria Harbor. Here then was the commercial centre of the Hurons, as it has also been of later Algonquin tribes. In other words, the physical features of the district were such that Victoria Harbor naturally became the focus or centre of the Huron population, the trails radiating from the head of the harbor in several directions inland along the higher ground. It appears to have been this very centre, the heart of the Huron confedee.acy, the Iroquois attacked in 1649; otherwise the Hurons would not so precipitately have deserted their country immediately after the capture of only two of their villages, had these villages been of the ordinary unfortified kinds. (It should be borne in mind that Ducreux's map is a guide for the position of the earlier St. Ignace and not that of 1649).

Through the farm of Chas. H. Newton, Esq., the west half of lot. 11, concession 6, Tay, the Hogg River has cut a deep path in the old take-bed deposits to a depth varying from fifteen to twenty feet. In this part of its course the river makes a loop something like the letter U, which encloses an ideal spot for a village requiring means of defence. (See illustration)

Hurons selected for one of their villages this plot of ground containing about five acres in the bend of the river. This ground is covered with ashbeds and blackened soil, mixed with relics. The latter consisted of iron tomahawks, knives, pieces of metal cut out of worn-out brass kettles, and pottery fragments in endless quantities. All these relics show that the site was one of those occupied down to the very latest period of the Huron occupation of the district. There are empty caches at the site, and a pottery just south of it, where the clay is of such good quality for plastic work, that Mr. Newton experimented successfully in making terra cotta from it. What appears to have been "the village corn-patch" occurs southward near a house on lot 10, and it may have extended as far north as the site itself, although the cultivated ground no longer shows any traces of the corn hills. From this site to Ste. Marie the distance is 3.5 miles.

A trail comes from Orr Lake by the way of Waverley, and just before reaching this village site divides into two strands, one passing down each side of the river. These meet again at the "Indian Clearing" further north on lot 12, as the diagram shows. The trail down the east side as far as the "Indian Clearing," and thence to the mouth of the river, was widened many years ago into a Government timber road, but is now disused. It is probable this so-called "Indian Clearing" is due to the gravelly soil, which would not permit of the growth of trees, rather than to actual clearing by the aborigines. But whatever its origin it was certainly a resort of modern Algonquin Indians, who followed pretty closely the paths of their predecessors, the Hurons.

It is most probable this site in the river's bend was St. Ignace, the Huron village captured by the Iroquois in the early morning of March 16, 1649, and the place to which they brought as captives Fathers Brebeuf and Lalemant a few hours later, and there tortured them to death. Its distance from Ste. Marie coincides pretty well with the records, all the writers agreeing that it was less than two leagues (five miles), and about a league from St. Louis, which agrees well with the site at Mr. McDermitt's. But the strongest evidence is in the configuration of the ground The Rev. P. Ragueneau's account of the place (Relation, 1649) suggests a plan of the village and its surroundings, and tells us beforehand what appearances we may expect to find there. He says;—

"It was surrounded by a palisade of posts from fifteen to sixteen feet high, and by a deep trench (fosse), with which Natuie had powerfully strengthened the place on three sides, a small space alone remaining weaker than the others. It was through that part the enemy forced his entrance."

While this description of St. Ignace will suit in some measure almost any palisaded site, because these were as a rule placed on a spur of land, the completeness of its fortification by a trench, effected by Nature in this case, was such as to attract the attention of the chronicler who wrote the description just quoted. (As the destruction of the place occurred in March, when the Hogg River would be covered with ice, its own existence in the gulley or trench would not be conspicuous enough to attract a recorder's attention). After a diligent search through all the sites of the locality, I can find none that so exactly agrees with this description of St. Ignace as this site on Mr. Newton's farm.

LATER EXAMINATION OF THIS SITE. The foregoing account is substantially the one the writer prepared after his examination of the site in 1899 and published a few months later. Since that time he has 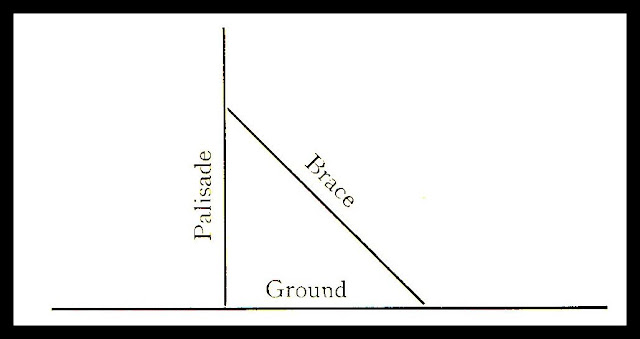 Cross Section of Palisade and Bracing.
given further attention to the site at various times, and has become even more firmly convinced that it was St. Ignace. The following particulars relate to evidence from examinations since the first account appeared.

At different times, when re-examining the palisading I used a light iron crow-bar (three-quarter inch, four feet long), driving it into the ground repeatedly along numerous lines of tests selected from where the ashbeds and signs of habitation ceased, and passing outward across the margin of the village site. At every stroke the crowbar sinks to the depth of the plowing, but along every line of tests made in this way it shows two places with softer subsoil, by sinking to much greater depths. In most cases these are about five feet apart, and occur at the palisade line, the outer being the palisade and the inner the feet of its line of braces. The spade always shows disturbance in the color of the subsoil wherever the crowbar indicates the line by sinking deeper than usual. The silted sand on this site was good material for the insertion of palisades by aboriginal methods, but not good for preserving traces of the palisades themselves, being too porous. Some traces, however, of the palisading are left, in the blackening of the sandy subsoil below the plow's depth.           -
A conspicuous refuse heap toward the northwest quarter of the site received our attention. This yielded the usual ashes mingled with pot- shreds and waste of Huron food supplies, especially animal- bones, and teeth, clam shells, etc. But the significant feature was an abundance of traces of bark in the upper part of the heap, evidently debris from a collapsed bark cabin, and in this particular it differed from the former ordinary refuse heaps of my experiences.

On April 28, 1902, the plow turned up a small bronze medal or token at a place near the easterly end of the site. On one side this bears the German motto "Gotthsgaben sol man lob." (God's gifts ought to be praised). The other side has the name of Hanns Krauwinckel, with the letters, "IN NU," i.e. "In Nuremberg," which was famous for its manufactures in bronze, the material in the medal itself. It was not easy to obtain information of the maker, Hanns Krauwinckel, in Canadian libraries, but the writer was able to get a few particulars about him through the courtesy of Dr. Wilberforce Eames of the New York Public Library and Mr. Lyman H. Low, a specialist on coins and medals, 287 Fourth Ave., New York. The medal is what is called a counter, and Harms Krauwinckel was a maker of these at Nuremberg during the period from 1580 to 1601. These counters were restruck at later periods, in thinner issues, to which class this thin specimen belongs.

Within the northerly side of the palisade, there is a line of whitish substance mixed with the soil, though now faintly defined from having been disturbed by the plough. A fragment of this crumbled deposit, when examined by a chemist at my request, proved to be old mortar. This line of deposit resembles the shape of the letter L as if from two sides of a cabin, with lengths of about 10 feet and 15 feet, the angle of the letter pointing in a northerly direction. Its position is on the highest rise of this some-what fiat site, and at its north side. As the Indians did not make and use mortar, this was doubtless the work of the Frenchmen. (The records contain evidence that the Jesuits maintained a lodge of some kind at St. Ignace.)

Indications, such as the foregoing, tend to show that this was St. Ignace. The Rev. A. E. Jones selected a spot about three miles farther from Ste. Marie since I fixed upon this Newton site, but the more distant place has not even yielded any indications of a Huron village site of any kind, as I have pointed out elsewhere. The proof of the question rests not so much upon theoretical assertions or claims, as upon what evidence the ground itself furnishes. And the authentic evidences at the Newton site, as furnished by the use of the spade, have been gradually increasing.
Posted by Gibson, William at 7:32 pm