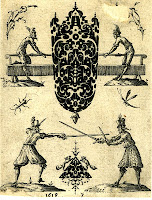 Design for a hilt in blackwork with pea pods surrounded by two goldsmiths, and a small scene with two swordsmen fighting [1619]. From a small and beautiful series by French enamel-worker, Jean Toutin*

I was posting recently on a Midland FB pgMidland Ontario Canada - Our Hometown - Then and Now and when exploring archaeological sites that are now in the town of Midland I came across the reference to the French sword dated 1619 found in what was then Tiny township on lot 99 con 1. A F Hunter is told of the find but there is no indication of what happened to it. It does not appear in items turned over to the Provincial museum ( now the ROM) and we have to assume it remained with the owner as did so many collections did and still do today.All may not be lost, in regard to the sword at least. I was reviewing the details of other sites that are now in the town limits and came across the Frazer site on lot 101 con 2 Tay. This owner did turn over his artifacts to the museum (catalog # 16,702) along with a French sword dated 1619 that had be given to him by "someone in the neighborhood". There is little doubt that lot 99 con 1 Tiny just off of Hwy 93 south of Hwy 12 would have been considered in the same neighborhood as lot 101 con 2 Tay at Hwy 12 and William St.

I think that it would be quite cool if Jamie could hunt down this rare artifact at the ROM and have it returned to the Huronia museum in time for the 400th anniversary of Champlain's arrival here. While this sword postdates Champlain's visit to Huronia, he is the one responsible for bringing the French here and as a result the placement of this sword on the land in the town we now know as Midland.