The following post is a cut paste from an interesting discussion from our Facebook group re the location of St Ignace II. Steve Catlin is the archivist at the Martyrs' Shrine. 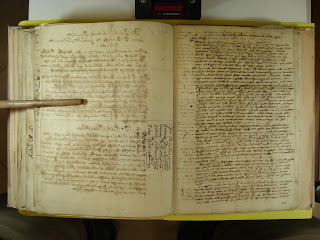 Steve Ca
Greetings. I have been editing the new Latin letters from the Huron Mission (1634- 1650) taken from L. Campeau's sj Monumenta Novae Franciae and a new distance from St. Louis to St. Ignace II is recorded- 2 miles (2000 paces). It puts the location between Newton and Gervais- looking at google maps there is a plateau surrounded on three sides by different elevation about 1000 feet due west of the end of Neilsen Road. Has this location been excavated? Steve Catlin, archivist, Martyrs' Shrine.Top of Form
·
·
John Raynor Would this interpretation also bring into question the distance between St Louis and St Ignace II
·
Steve Ca thats the distance I am talking about...or maybe I am misreading your post.. I think the present st. ignace II is more than 3 miles away.
·
Steve Ca ....from st. louis.
The document in question is in MNF 7, number 104. The original manuscript in the Jesuit archives in Rome (ARSI) is Gal 109 I ff. 221- 227, 228- 232; second paragraph of second section (2). I checked a scan of the original document and yes it does say 'two miles' and not two leagues (when I was in Rome for the canonization of Catherine Tekakwitha, I obtained scanned versions of Gal 109 I II III, Gal 110, and Gal 39 for the Shrine archives.
Top of Form
·
·
William J. Gibson Would love to hear about your visit to Rome for the canonization
·
John Raynor Where does the 2000 paces that you mentioned come into this interpretation?
·
Steve Ca  Hi John, the term mile the comes from millia/mille which is 1000 in latin and french. So a mile is generally 1000 paces (I think that is the origin of the term. And Bill, you can go to my blogspot...catlinatthevatican.blogspot.ca and I was telephoned interview by CTV NEWS so go to their website and search catlin Tekakwitha, it should be up. There is also a youtube of Steve Catlin archivist canonization Rome where I send greetings to the Shrine and Chimnissing Island. Thanks for your interest.
·
John Raynor In my read of the JRs the undefined term league is used in most all of the references to distance. The exception to this might be Bressani who may have used the Italian mile as a distance reference on occasion. I had always thought that the Italian mile was shorter than the French or British mile but not as short as 1000 paces or about 1 km. So that would mean that we need to use this shorter distance whenever we read Bressani's work. This would make a substantial difference as to where we sure for sites where Bressani's measurements are used - this would included St Ignace as he was involved in the recovery of the bodies I believe from there and there return to Ste. Marie. I am surprised that A E Jones didn't pick up on this as he was a linguist I believe.
Steve Ca Yes I think the French would use league (the general distance one walks in
an hour- ergo time), the latin documents would use mile, which is more
based on distance. The 1000 paces= 1 mile is more a common understanding of
the term millia.

Original Message:
·
John Raynor So how many of the documents of the JRs were written in Latin vs French and what did they pertain to. If the ones in Latin refer to distances I need to re read them with a revised understanding. I think that it was only Bressani's work but I am not sure.
·
Steve Ca The JR's are all in French, except the one in italian by Bressani (1653- and I think he wrote an italian one for Father General in 1641), but the letters to Father General in Rome were in Latin (since he did not read French). The JR's were for the French public to devour, the Gallias, Franca, etc were private correspondences which were in latin and have only been printed in Latin in Lucien Campeau's Monumenta Novae Franciae (which also has French documents). There are nine volumes to this work, the last being published post humously. I will be producing the Huron latin letters to the General in Roma and his responses, within the next few months (translator Fr. Bill Lonc sj et al) and the book will be called Latin Letters from the Huron Mission (1634- 1650).
·
John Raynor So just to confirm, I need to re read Bressani's work with a view to a 1,000 pace mile when he references distances.
·
Steve Ca As a land distance, I would agree. Also, I have read that Ragueneau did not spend much time at Ste. marie but would go to all the mission villages to assist the priests and would spend time with each Christian Wendat so he knew them personally. He travelled the trails very frequently so would know the distances better than the donnes.
·
Steve Ca Sorry, it was in his letter to Father General that he uses two miles, May 1st, 1649.
·
John Raynor Well you know where I am going with this - but wasn't Bressani's work including his reference to distances used in support of Ragueneau's writings re distance to St Ignace?
·
Steve Ca You have most of the info at hand and are very versed, I can only go with what I am reading before me, and I find the two miles shocking to say the least. Of course it may bring into question the location of other villages but my interest at this time is St. Ignace II. I wonder if the distance on between villages on the Bressani map were then made with the two mile rule between St. Louis and Ignace II, if the map were to scale.
·
John Raynor A E Jones uses the 3 mile league to justify the location of the villages in question. We would agree that Ragueneau probably used the 2.5 mile or 4 km French/Jesuit league. Bressani then uses the 1,000 pace or 1 km mile and hence we might have an understanding that St Ignace was only 2,000 paces from St Louis. The circle gets tighter and tighter here particularly when it is indicated that Ste Marie, St Louis and St Ignace were equal distances apart as one works east from Ste Marie. This would draw St Louis far closer to Ste Marie than the Newton farm on the Hogg river. 2,000 paces would be well within sight of Ste Marie if the terrain was not too hilly.
·
John Raynor Good discussion Steve, we will have to go for a walk in the spring - a shorter walk than the pilgrims do know.
·         John Raynor Do you mind if I clean this up a bit and post it on the chapter blog - others may wish to comment on it there.
·


John Raynor Here is another confusing statement in the notes for vol XVII of the JRs -" 5 (p. 99).— Martin (Life of Jogues, app. A.) is correct in saying that there were two missions bearing the name of St. Ignace. The one captured by the Iroquois in 1649 was apparently thus named but a short time before its destruction (Relation of 1648, chap. ix.); it was not more than five miles from Ste. Marie-on-the-Wye." This note would indicate that St Ignace 1 was only 5 miles from Ste Marie yet the Rosemount Rd site of Ste Marie II is farther than that. St Ignace 1 is reported to have moved closer to Ste Marie, not farther away when it was designated as St Ignace II?


John Rayno  FYI - the distance from Ste Marie to the site on the hill at the entrance to Port is about 2,000 meters.