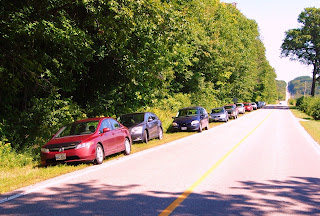 Saturday and Sunday, 17 and 18
of August 2013, were the “Public Archaeology Days,” sponsored and hosted by the Huronia Chapter of the OAS. Nature smiled on us with two gorgeous days of sun and soft breezes (no thunder storms as we endured last year), and the turnout was spectacular, at least 25 people on each day, with
ages ranging from youngsters to oldsters, each and every one being avid to get going and make great discoveries.
The dig was held at the Allen tract, in the Simcoe County Forests of the Tay Peninsula,
lying between Midland and Penetanguishene. The task ahead of us was to continue sifting the soil of a midden which had been disturbed by pot-hunters, which we had spent two days on last year, to find what they had missed, and to bring the disturbed level down to untouched soil.
The dig is under the licence and aegis of Dr. Alicia Hawkins of Laurentian University
(Sudbury campus); also attending both days were Drs. Bonnie Glencross and Gary Warrick,
both of Wilfrid Laurier University in Kitchener-Waterloo.; we were also graced with the
inspired and inspirational presence of several happy youngsters ― imagine their utter delight:
an open invitation to get dirty.
And our hard work and dedication were rewarded: many beads (both glass and shell),
some copper material, several chert sherds, and the ever present burned corn, fish and mammal bones. There were some anomalies: some .22 shell casings (presumably not Ouendat or the books will have to be rewritten) and a broken axe head (whether it is trade period or not will have to be determined by much wiser minds, but it sure raised the blood pressures of several
of us). The beads were distinctive and varied, ranging from round shell or bone beads to a large, indigo coloured “football” bead, to varicoloured striped glass, tiny round red glass, long white and blue glass beads, and even a double football, fused, and incised, bead of dark indigo colour, very distinctive and a neat find. Gary Warrick took a walk in the creekbed, upstream from our dig, and came back with a huge collar of a pot, about the size of the open palm of one’s hand.
He reported more such sherds, too, but left them in situ.
Dr. Hawkins has given a preliminary date to this site, from the beads being found there,
of somewhere around 1610-30; it is, of course, a contact site, with the presence of French trade material being very evident. It is the intention of the chapter to continue the investigations next year, and it is fervently hoped that both Laurentian and Wifrid Laurier Universities will conduct field schools on this site and nearby sites in the years to come. All are invited to attend next year,
and are encouraged to join the Ontario Archaeological Society. See you then.

For more photos & Videos of this event please visit the PA 2013 album on our Facebook page.
https://www.facebook.com/HuroniaChapterOfTheOntarioArchaeologySociety?bookmark_t=page