Finds from our latest public dig. 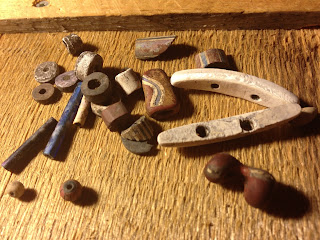 After washing up some of the artifacts from our public dig in August these beads and other evidence of European trade will help us date the site. These artifacts and all the rest will go to Alicia Hawkins at Laurentian U. for further analysis.
Last year we found about 25 beads and other metal objects that will help tell the story of this site.
There are more photos of this collection on our Facebook page - https://www.facebook.com/HuroniaChapterOfTheOntarioArchaeologySociety?bookmark_t=page

Time to wash up - artifacts from the Allen tract. 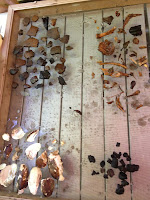 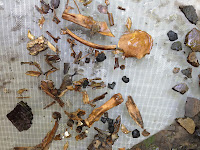 As a result of a our very successful public archaeology event at the Allen tract August 17th-18th we have a lot of artifacts that need our attention before we send them to Alicia Hawkins at Laurentian U for further detailed analysis. 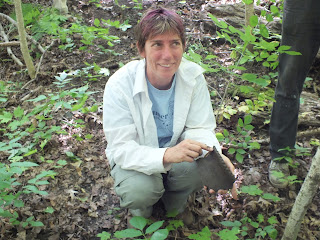 I will also share a number of quotes from Sagard's "Histoire du Canada" that indicate what we might expect to find on a Recollet era site (1615-1625). These quotes will also give us a slight glimpse into life in these villages at that time.
Meeting Details: Meeting held at Huronia Museum at 7 pm, presentation open to the public, chapter business meeting which follows the presentation is open only to OAS Huronia Chapter members. Huronia Museum 549 Little Lake Park Road. Midland, Ontario.  705.526.2844
http://www.oashuroniachapter.com/

You can help us by completing this quick survey.The Huronia Museum is undertaking a Strategic Planning Exercise that will identify strategic directions and actions to be taken over the next several years. 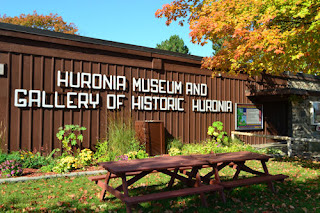 Posted by John Raynor at 4:12 pm No comments:

So what Wendat village was the "first Mass" in Huronia held?

I was searching through Sagard's Histoire and came across the following paragraph which states that the first Mass said in Huronia was near the village of Toenchain (otherwise known as Toanche). Why then is it recorded as the village of Carhagouha. 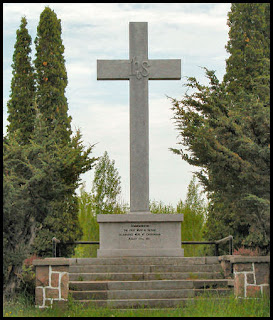 "Our poor hut might be about twenty feet long and ten or twelve wide, in shape like a garden arbour, covered all over with tree-bark except at the ridge, where an open crack had been left from one end to the other to let out the smoke.  We finished it off ourselves as completely as we possibly could, making partition-walls of pieces of wood, which divided the hut into three rooms.  The first of these next to the door served us as bedchamber and kitchen, for doing all our little household work, and for our rest at night, which we took on the ground lying upon a little reed mat, with a block of wood for pillow and some logs that each had arranged in front of his bed so as not to be seen.  This division also served us as an assembly-room for receiving and conversing with our savages, who came daily to visit us.  The second room, the smallest, was that in which we kept our utensils and small furnishings.  And the third, in which we had set up an altar with pieces of wood fixed in the ground, served us as a chapel.  This was the second ever built in the Huron country and surrounding parts, in which Mass was celebrated every day, to the great satisfaction and comfort of our souls, for before us neither priest not friar had ever set foot upon it, with the sole exception of Father Joseph Le Caron, who celebrated the first mass near the town of Toenchain.  And for fear of the thievish hands of the savages we always kept the little bark doors closed and tied with bits of cord, having no better way of fastening them.  Around our dwelling, although the soil was rather poor and sandy, we made a little garden, fenced off by stakes so as to prevent free access by the children.  The peas, herbs and other trifles which we had sown there did quite well, and would have done better if the soil had been well cultivated, but we had to use an old axe instead of a spade, and a crooked pointed stick for all other implements." Histoire pgs 186-187
Posted by John Raynor at 4:57 pm No comments: 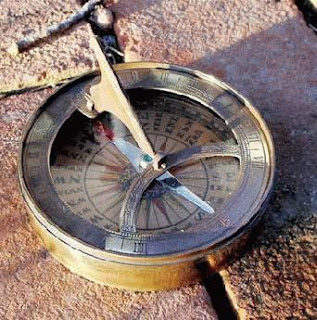 From Sagard's Histoire - "Then taking my sun-dial I would leave the town to go somewhere apart, in order to be able to recite my office in peace and the engage in my customary prayer and meditation without disturbance." 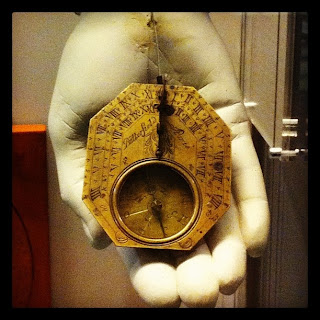 These portable units were probably standard issue for the Priests and the rest of the French who explored Huronia in the 1600's. The combination of a compass and sundial were essentials tools when native guides were not on hand and you needed to get back to your cabin in time for dinner.
Used in conjunction with the astrolabe pictured below one could navigate pretty well without worrying about you batteries going dead or the satellite being unavailable.
Unfortunately, even with these devices, no one ever left us a map of Huronia detailed enough to follow their trails and find there cabins today.
I guess that we will just have to keep digging a little deeper to find their footprints and the sign they left behind 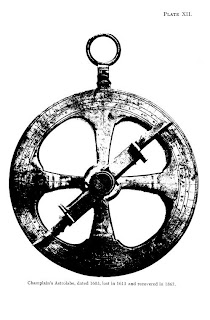