This is the only land surrender that I know of the was truly etched in stone. 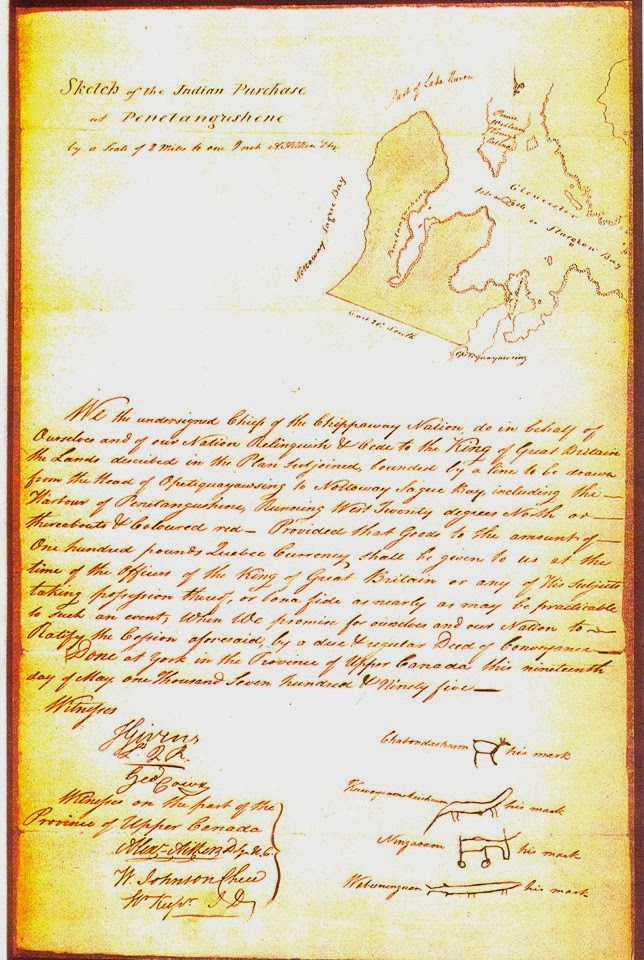 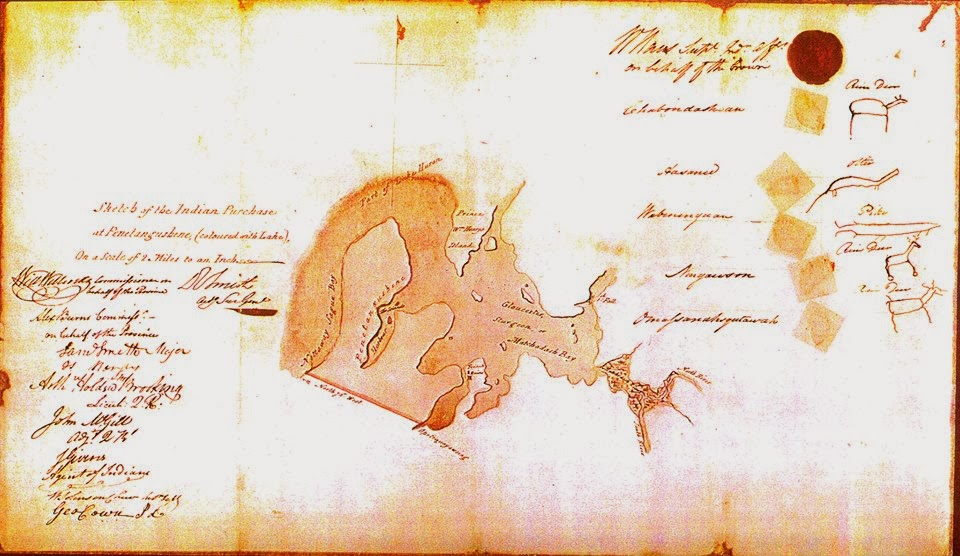 Posted by John Raynor at 9:49 pm No comments:


Timmins Martelle Heritage Consultants Inc. is now accepting applications for personnel for the 2014 field season.
We are currently looking to hire individuals who can fill full-time, seasonal
positions as:
* archaeological field technicians and supervisors;
* report writers
Applicants should have some training in or knowledge of archaeological field and laboratory methods. Experience in cultural resource management is highly desirable but not mandatory.
Applicants interested in the position of Archaeological Field Supervisor must possess an Anthropology/Archaeology (or related discipline) degree, a valid Professional or Research Licence to supervise archaeological fieldwork in Ontario, and a valid driver’s licence.
Applicants will participate in archaeological projects throughout southern Ontario and should be prepared for some overnight travel. All projects will be run out of our London office. Field staff will be transported to site and paid their full wage for travel. Some fieldwork will be conducted jointly with First Nations groups. First Nations students are also encouraged to apply.
THMC Inc. accommodates persons with disabilities on the job, and during the interview selection process.
Please forward inquiries and applications to:
Timmins Martelle Heritage Consultants Inc.
@ the Museum of Ontario Archaeology
1600 Attawandaron Road
London, Ontario N6G 3M6
Phone: (519) 641-7222 Fax: (519) 641-7220
Attention: Tom Porawski, M.A.
tporawski@tmhc.ca
Posted by John Raynor at 5:09 pm No comments:

How the discovery of a 460-year-old English shilling in B.C. could help rewrite the early history of Canada

Painting by Marcus Gheeraerts the YoungerSir Francis Drake was an English sea captain, privateer, navigator, renowned pirate and politician of the Elizabethan era. Elizabeth I of England awarded Drake a knighthood in 1581.
Former B.C. cabinet minister Samuel Bawlf, the leading proponent of the Drake theory and author of a 2003 book on the subject, says the discovery of the coin by a Victoria metal-detector hobbyist adds to the substantial documentary evidence that Drake — well known to have reached California during his 1579 expedition — actually sailed to Vancouver Island and well beyond, but was ordered by Queen Elizabeth I to hide the true extent of his northward travels to protect England’s strategic interests in the New World.
And one of the province’s top archeologists, Royal B.C. Museum curator Grant Keddie, told Postmedia News that he’s made plans to examine the 460-year-old shilling, noting that “this now makes three coins from the 1500s” that have been found along the B.C. coast.
“I am encouraging [relic hunters] to take another look at things they may have found here that are not identified — such as ceramics or glassware — that might date to the same time period as the coin,” added Keddie, who has described Bawlf’s theory as compelling and worth continued investigation by scholars.
The newly discovered coin bears marks indicating it was produced between 1551 and 1553 during the reign of King Edward VI, the son of Henry VIII and half-brother of Elizabeth I. It was found in December by retired security specialist Bruce Campbell, who told Postmedia News he initially had no idea the centuries-old bit of silver could help rewrite the early history of Canada.

“I made an off-hand comment that everybody I hunt with finds all the goodies and I don’t,” said Mr. Campbell, 59, recalling the Dec. 13 outing with friends. “So I said I’m going where no one else is and walked down and into the high-tide line.”
Over the next hour, in the fading light of what would become Mr. Campbell’s luckiest-ever Friday the 13th, he repeatedly hit paydirt: first a rare 1891 nickel, then an interesting dime from the 1960s, then a large penny from 1900.
Finally, as dusk was setting in, his detector turned up an old, encrusted piece of metal from under eight centimetres of blue clay.

HandoutThis 16th-century coin was discovered buried in clay on a Vancouver Island shoreline.

HandoutThis 16th-century coin was discovered buried in clay on a Vancouver Island shoreline.
“It was all black and crusty and full of gunk from being in the water,” said Campbell, who described how some careful cleaning with soap and water and a soaking in lemon juice revealed clear details of an English shilling with Edward VI’s portrait.
“It turned out to be very nice underneath,” he said, noting that he initially had “no idea” that unearthing a 16th-century coin in B.C. could have implications for the history of the province, the country and whole grand saga of New World discovery.
“I just thought it was a cool coin to find,” said Mr. Campbell. But fellow members of an online forum for metal detector enthusiasts soon informed him of the potential link to Mr. Bawlf’s tantalizing theory about Drake.
“I ended up with the find of a lifetime,” said Mr. Campbell. “It definitely does deserve further research.”
Mr. Bawlf bases his theory on encrypted maps and other British archival documents from the late 1500s that suggest Drake was directed to safeguard his first-hand knowledge of the Pacific Northwest from England’s Spanish enemies.
Other finds hinting at a possible 16th-century English presence along the B.C. coast include a 1571 sixpence dug up in 1930 in the backyard of a Victoria home and another Tudor-era coin unearthed on Quadra Island.

I ended up with the find of a lifetime

“The documentary evidence is compelling in and of itself,” said Mr. Bawlf, who helped construct B.C.’s heritage-protection regime when he was a provincial cabinet minister in the 1970s.
His theory about Drake, he insisted, doesn’t hinge on discovering coins or other objects left behind by the explorer during an officially unrecorded voyage to the future Canada.
“But now we’re getting corroborating evidence. And two of the three coins were found long before I put pen to paper, so this is just further impetus for the documentary proof,” said Mr. Bawlf.
Posted by John Raynor at 12:38 pm 2 comments:

from the unpublished journal of Jehan Leblanc

January 12th 1614 – Rumor has traveled back to Honfleur that Champlain and Helene are sharing the same residence again but not under less stress. I feel sorry for my friend and mentor for he has told me that he does love her deeply but does not know how to fit her into his life and he would not be content to live the lifestyle she seems to prefer. We had this intimate conversation when he named an island near the great rapids in her name.  He is a man of great passion but more for the adventure of exploration and discovery than that required for strong human bonds. Like an island in the sea he appears to need only himself and his dreams to survive but like all of us he is tied to others like the island to the earth beneath the surface in ways we can not see.

from the unpublished journal of Jehan Leblanc

January 6th 1614 – I got word that Champlain was in difficulty with family. Helene had been required by contract to live with Champlain as wife from age of 14 years. That time had come this past fall upon our return from . Helene I had been told resisted this but finally complied with the obligations she was under. This arrangement lasted under duress until January 4th when Helene had disappeared from his home. I am told that both he and her family are now in a search for her.

Due to very a unfavourable weather forecast for the Midland area that stretches through til Wednesday it has been decided to cancel our AGM and members meeting for a second time set for tomorrow evening at the Huronia museum.We will try again in February.
Posted by John Raynor at 11:31 pm No comments: