The Tec We Gwill Historical Society held their annual general meeting and were treated to a special presentation by Professor/archaeologist Marti Latta from the University of Toronto.
To a nearly full room at the Tec We Gwill Women’s Institute, Dr. Latta spoke about an archaeological dig in Beeton in 1976. During the dig, Dr. Latta and her team found remnants of a permanent village of about 300 – 500 people, including about 10 to 12 permanent houses made of wood that was situated just south of Beeton on the 10th side road between the 6th and 7th concessions.
“Unfortunately they came and went before there were any Europeans here to write about them, so we had to figure them out for ourselves,” Dr. Latta told the room. “These people were farmers. They raised a number of crops and you’ll see that they raised corn, beans, pumpkins and squash and probably tobacco.”
The village was thought to be an independent city state that was situated and protected at the top of a hill and looked to be a rather rich village that traded the sought after flint stone that they brought up themselves in canoes from Hamilton or Grimsby.
“They were middlemen with a lovely location to control a very important and profitable trade.”
The dig uncovered plenty of tools, pottery, woodworking tools, axes, hoes, hunting tools, needles carved of bone, games and lots of smoking pipes. Dr. Latta said the location itself was ideal for a village, situated at the top of a hill, with a permanent spring (that still runs to this day) and connected to rivers leading to all of the major water sources in the area.
The site itself was found just about 20 centimetres below the top soil of a corn field and also turned up some things that stumped the team.
“One of the things that we did find that we found very interesting, was some little bits and pieces of brass,” Dr. Latta said. “They were tested with neutron activation and are definitely sixteenth century brass. That gives us the next question of what was the date for the site.”
The brass would have been there much longer before the first arrival of Europeans in the area, which suggested it was traded “hand to hand” all the way from the east coast.
“They might have been getting some of this European brass from much farther east and then passing it along and it would have been incredibly rare,” she said. “We tend to think copper isn’t very important, but these were people for whom copper was more excited than we would feel about gold today.”
Dr. Latta explained that everything seemed great for the village and then eventually it was abandoned after what looks like an attack from neighbours that burned most of the site.
As for the remaining artifacts of the site, Dr. Latta delivered some sad news that much of what was uncovered was lost in an accidental “spring cleaning” at the University of Toronto. “It’s appalling and part of the reason I am here is to convey apologies,” she said. “It was just one of those horrible human mistakes that people make.”
There hasn’t been any excavation at the site since 1976, but much of the site is still protected by the Town of Beeton and Dr. Latta hopes it is explored again someday. “It’s a lovely site and really deserves some more attention.”
By Jeff Doner
Posted by John Raynor at 8:27 pm 2 comments:

The Ontario Archaeological Society (OAS) and Archaeological Services Inc. (ASI) are jointly hosting an event to honour former OAS President Charles Garrad and his newest book, entitled Petun to Wyandot: The Ontario Petun from the Sixteenth Century (edited by Jean-Luc Pilon and William Fox), which is due to be published this month in the Mercury Series by the University of Ottawa Press and the Canadian Museum of History (see also flyer, attached).

Please join us on Tuesday, May 27th from 6 - 8 pm at Massey College at the University of Toronto. A cash bar and appetizers await you there. There will also be an opportunity to purchase the book and we will provide pricing details in future correspondence with confirmed attendees.

The event is free to attend, but we encourage you to RSVP as soon as possible, as space is limited. Please let us know by May 24th if you can attend by sending an RSVP email to rsvp.oas@gmail.com, providing your full name and the names of anyone else accompanying you.  (Please do not reply to this message.)

More information on the book can be found here: http://www.press.uottawa.ca/petun-to-wyandot.

We look forward to seeing you as we help Charlie launch his magnum opus!
Posted by John Raynor at 5:40 pm No comments:

Things you may need to know.

Who owns the artifacts?

The answer to this question is ambiguous at best. The answer differs somewhat depending on the landowner: the rules for federally owned lands, such as national parks, and First Nations reserves are different from those applying other lands in Ontario. The Ontario government does not assert ownership of artifacts, but it does set out the laws governing the practice of archaeology in the province. These state that:
1.     Only a licensed archaeologist may collect or excavate artifacts in the province of Ontario.
2.     Under the terms of the licence, the government charges the archaeologist with holding the artifacts in trust for the people of Ontario.
3.     The archaeologist may place the artifacts in a public institution, such as a museum, for safekeeping.
In other words, the licensed archaeologist is the only person who may collect artifacts, but she or he does not own them. In fact, one could say that every resident of Ontario owns them, but no single individual does.

Does this mean that I need to turn over the collection that my grandfather made in 1952?

No. While it would be great if it was donated to a museum, the province is not attempting to recover old collections. It does mean that you should not be adding to that collection.
Can anyone dig?

What is the penalty for digging without a license?

The Cemeteries Act and the Funeral, Burial and Cremation Services Act, when proclaimed in force, requires anyone who uncovers a burial site containing human remains to report the discovery to the appropriate authorities — the police or a coroner. Likewise, archaeologists who encounter human remains during archaeological fieldwork are required to comply with all relevant provisions of the Cemeteries Act and Ontario Regulation 133/92 (Burial Sites) as part of the terms and conditions of their archaeological licence.
If human remains are discovered during land development activities, all construction and soil disturbance must stop immediately to allow the authorities to investigate. All archaeological fieldwork must stop until the coroner has had the opportunity to investigate and the Registrar of Cemeteries has been consulted. The Cemeteries Act requires that the descendants or representatives of those buried at the site be consulted prior to any decision regarding final disposition of the remains be made.
Who are the descendants of the people who once lived here?
The Huron/Wendat confederacy that consisted of four or five confederated nations living between Nottawasaga Bay and Lake Simcoe. They reported to have lived here some 200 to 300 years prior to the first Europeans arriving in Huronia and were Iroquoian by culture and language.

How can I get more involved?

Join the Ontario Archaeological Society or come to a local chapter meeting.

BENEFITS OF OAS MEMBERSHIP
The Huronia chapter of the OAS meet the second Wednesday of each month at the Huronia Museum in Midland, Ontario.
Meetings start at 7:pm with a presentation and is followed by a business meeting of the chapter.
Members, guests and the general public are welcome to attend at no charge.

Visit the Huronia chapter blog to stay informed of chapter activities and join in the discussions relating to the archaeology and history of Huronia.

http://www.oashuroniachapter.com/
More on the legalities of the practice of archaeology in Ontario:


http://www.mtc.gov.on.ca/en/archaeology/archaeology.shtml
Posted by John Raynor at 3:30 pm No comments:

Huronia Museum Roof Collapse
Late in March of 2014, the Huronia Museum experienced the collapse of a section of its flat roof.  The Art Gallery of Huronia room was affected.  The enormous snowfall of this winter along with the thaw and freeze cycles created the conditions for the problem. The gallery contains work by the Group of Seven, early watercolours and the art of Midland artist W.J. Woods among others.  It is an important jewel in the museum’s crown.  The Huronia Museum opened in its first building, the old Playfair Mansion down near the harbour, in 1947. The current museum building in Little Lake Park was opened in 1967 and extended in 1975.
No art was damaged.  One display case and the carpeting was damaged.  The case can be restored. For the time being the art gallery room will be closed.
For a number of years, the museum has been studying expansion construction plans looking for an appropriate plan of action to be followed by an intensive fundraising campaign.  One approach has progressed to the point of architectural drawings.  Another idea was to mimic the architectural style of local barn designs and add a second floor on the existing footprint structure.
There are a number of issues that complicate the project of expansion.  Along the way the protracted settlement of the insurance claim following the fire that damaged part of the Huron village took up a lot of the time of the museum board and administrators. Another factor is the desire to include the boats of the maritime collection which are now in storage and unavailable for viewing. It cannot be denied that the Huronia Museum has a rich and varied collection: archaeology, pioneer, First Nations, maritime, and art collections.  The puzzling problem is how to fit all this worthy material and the museum’s wallet in the creation of a new, exciting home.  The museum has over one million artifacts in its collections.


Over the years our chapter has had outstanding cooperation from the museum.  You might consider the idea of a financial contribution to the Huronia Museum this year.
Posted by Gibson, William at 7:19 pm No comments: 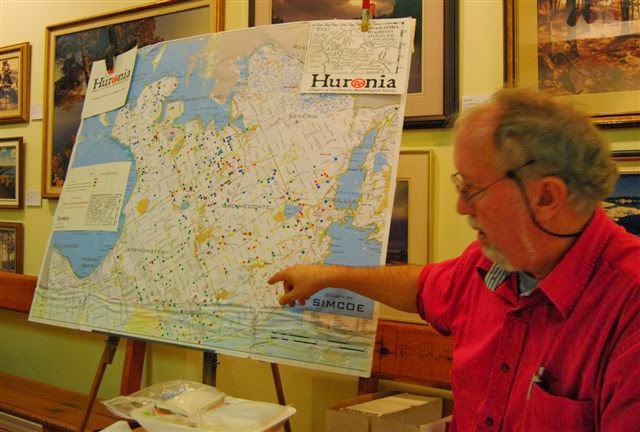 Jamie Hunter will be making a presentation on Huron sites and Population Levels in Huronia at the Huronia museum Wednesday April 9th at 7 PM.
Meetings are open to the public at no charge.
http://huroniamuseum.com/
A brief business meeting will be held after the presentation for Huronia chapter members.
Posted by John Raynor at 12:57 pm No comments:

Group membership at the Huronia Museum. 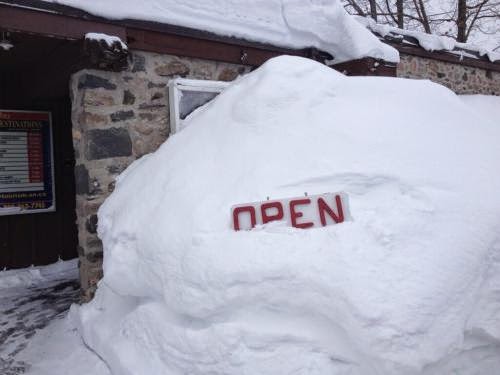 The Huronia chapter executive purchased a group membership at the Huronia Museum that entitles its members to get free access to the museum, village and resource centre along with a 10% discount at the museum's gift shop and bookstore. - enjoy.