The Longhouse in Winter 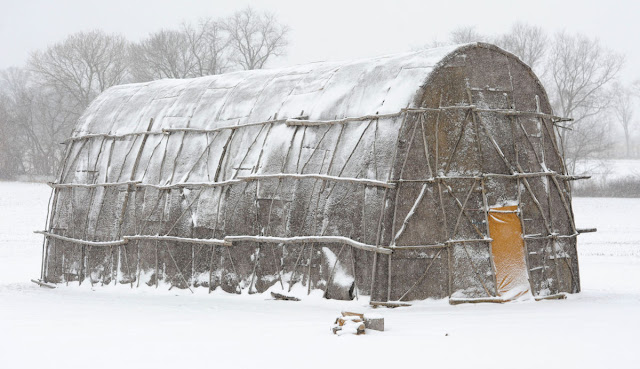 Have you every tried to imagine what it would have been like to live in a longhouse during a winter like we are currently experiencing in Huronia?

I posted this photo and question to the Huronia chapter's Facebook group (www.facebook.com/groups/Huronia.chapter/) and there were a number of interesting comments and additional questions.

To address these questions I used what I could remember from various primary source documents such as the Champlain's journals, Sagard's Histoire du Canada and the Jesuit Relations.
One of the best descriptions of a longhouse that I found was in Sagard's Histoire chapter XI. It reads as follows:
"Their lodges, which they call Ganonchia, are constructed, as I have said, like arcades or garden arbours covered with tree-bark, twenty-five or thirty fathoms long, more or less (for they are not all of equal length), and six in breadth, with a passage down the middle ten or twelve feet wide running from one end to the other.  At the two sides there is a kind of bench, called Endicha, of the same length [as the lodge] and four or five feet high; on this they sleep in summer to escape the annoyance of the fleas, of which they have many, and in winter they lie below on mats before the fire, packed close together for greater warmth, the children in the most comfortable place and the parents next them; and there is no space between them nor separation either at the foot or at the pillow, no more above than below, and they make no other preparation for sleeping than to stretch themselves out in the same place where they were sitting and to wrap up their head in their blanket, without any other covering or bed.  This is an easy way of going to bed and it can be carried out at small cost.  The whole space underneath these benches they fill with dry wood for burning in winter, but the great logs called Ancincuny,91 which are used for keeping the fire in by having one end on the ground and the other raised on a stone or at the end of a billet, are piled up in front of their lodges or packed into the porches, which are called Aque.  All the women help one another in providing this wood; they do so in the months of March and April, and by this arrangement every household is supplied with what it needs in a short time.  They use only very good wood, preferring to go far in search of it rather than to take less trouble and get bad wood, or that which makes smoke, on account of which they always keep up a clear well made fire with a small quantity of fuel.  And if they do not find trees as dry as they like then they fell those which have dry branches, breaking the branches into splinters and cutting them to an equal length, like the faggots in .  They do not make up faggots of twigs at all, nor use the trunks of the trees felled; they leave them to rot on the ground, because they have no saw for sawing them up, nor the means of breaking them to pieces unless they are dried and rotten.  We were not so particular, we used the first wood that came to hand, so as not to spend our whole time in going to look for it; for we ourselves and the women savages had to provide it.  They used to give us some, out of politeness merely, or as gifts in return for other presents of equal value, except when we were living in their lodges.  In a single lodge there are many fires, and at each fire there are two families, one on one side, the other on the other; some lodges will
_________________________
91 Aneincuny in the Grand Voyage and the dictionary
have as many as eight, ten, or twelve fires, which means twenty-four families, others fewer, according as they are long or short.  There is smoke in them in good earnest, and this causes many to have very serious trouble with their eyes, as there is neither window nor any opening, except the one in the roof of the lodge, through which the smoke escapes.  These lodges have no partition or division to hinder you from looking from one end to the other and seeing what is going on.  Yet all remain at peace and without any confusion or clamour, each household in its own division with all its belongings, which are neither put away not locked up with keys or iron bolts.  At each end there is a porch, and the principal use of these porches is to hold the large vats or casks of tree-bark in which they store their Indian corn after it has been well dried and shelled.  In the midst of each lodge are suspended two big poles which they call Ouaronta; on them they hang their pots, and put their furs, provisions, and other objects, for fear of mice and to keep the things dry.  But the fish, of which they lay in a supply for winter after it is smoked and well dried, they store in casks of tree-bark, which they call Acha, except Leinchataon; they do not clean this fish and they hang it with cords in the roof of the lodge, on account of mice and of the vile smell which it gives out in warm weather, so bad that nobody here could endure it.
For fear of fire, to which they are very liable, they usually put away their most precious possessions in casks of tree-bark, which they bury in deep holes dug in the corner of their fireside, covering them up with the same earth, and in this way these possessions are preserved not only from fire but also from the hands of thieves, because they have no chest or cupboard in their whole establishment except these little casks.  It is true that they rarely wrong one another, but still there might be rascals there who would do you an injury if they found the opportunity; for the object arouses the capacity to deal with it, said the philosopher, and opportunity creates the thief."

This blog post from ASI is also an interesting read. - http://asiheritage.ca/winter-longhouse-project-1979/