Happy New Year and compliments of the season.

Beginning the year 2019 in fine style, on Wednesday, 9 January, 7 p.m. at the Thompson Room of the North Simcoe Recreation Centre in Midland, our speaker will be Janet Turner, and her topic will be titled “The Molson Site: A Proto-Historic First Nations Settlement, Barrie, Ontario.” 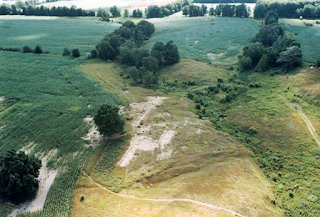 Janet Turner, a secondary school Teacher, was given the unique opportunity to run a Summer School Co-op Education programme under the direction of Paul Lennox and Gary Warrick in 1985 at the Molson Site in Barrie. Co-op Education was in its infancy at this time, so 22 chosen students from the five Barrie secondary schools (grades 9-12) received two Grade 11 credits in “Archaeology” for the instruction they got over a five-week period from the archaeological crew. This was considered to be a salvage dig as major development was imminent.

Janet was raised on a farm in Innisfil Township and has always been intensely interested in the history of the area. The fact that The Molson Site, being located off Harvey Road and in Innisfil and not yet annexed by Barrie at the time, increased her enthusiasm for the project.
Janet had been trained by Dr. Dean Knight and Isobel Ball earlier at the Ball Site off Mount St. Louis Road and had subsequently written a Grade 12 Curriculum based on her experiences, which a Twin Lakes Secondary School teacher and other educators used.

Janet would like to share with others her experiences at the Molson Site as well as the conclusions drawn by Paul Lennox in his Archaeological Report, mindful of the spirit of Reconciliation.

The public is free to join us at no cost.

Sounds interesting! I will be happy to go and be a part of this first gatherring of 2019!!!!!!