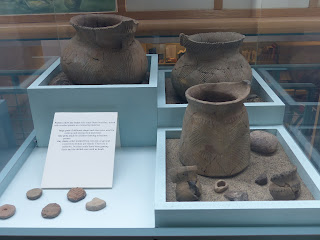 On Feb. 1st, six members of the Huronia Chapter of the O.A.S attended a Pipe Ceremony held at the Simcoe County District School Board's Education Centre in Midhurst, Ontario. Two of the Huronia Chapter's attendees were Janet Turner and Jim Shropshire , both of whom were part of the archaeological team that excavated the Molson Site from May to October, 1985.
Hosting the event was Corry Van Nispen of the SCDSB and Darryl Wines of the Collections Department of the Simcoe County Museum.
The ceremony was conducted by Jeff Monague, a resident of Christian Island, Pipe Carrier and representative from the Culture and Heritage Committee of the Beausoleil First Nation.  A member of the chapter presented a gift of tobacco to Mr. Monague, paying honour and due respect to him at this occasion.
After the 1985 salvage excavation of the Molson Site, a 400+ year old Protohistoric settlement in south Barrie, many significant artifacts found there became part of an extensive display at the board office. Space at the board office is now at a premium and the decision was made that the best place for the artifacts, display cases and written information would be directly across the road at the Simcoe County Museum to expand its First Nation exhibit. The ceremonial offering which connects the physical and spiritual worlds, was observed to give thanks to and seek blessing from the Ancestors as the artifacts begin this journey. 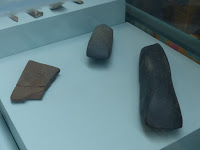 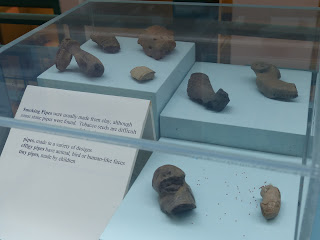