In Search of a Homestead

A couple of months ago the Huronia chapter of the Ontario Archaeological Society embarked on a quest to find one of the original homesteads of a Metis/Voyager family that came from Drummond Island to the Naval and Military Establishments at the head of Penetanguishene Bay. 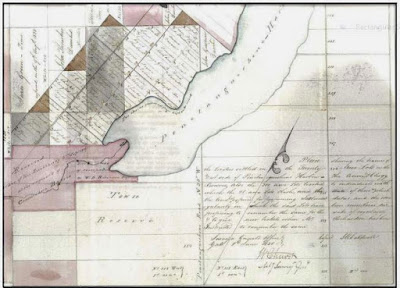 My assumption, when we began this search, was that most of these families that arrived here, stayed here and settled on the military reserve lots set aside for the loyalist Metis on the west side of Penetanguishene Bay opposite to the Establishments.

My search began with a study of the Osborne Papers that were published in 1901. The Osborne Papers are a collection of narratives collected by A. C. Osborne of Penetang obtained by interviews with some of the Drummond Islanders and their descendants. It is from this document and other records that a list of names of the Drummond Islanders has been obtained and here references are made to the places that they first settled their families. This documentation quite often includes the lot and concession number or other property location reference that allows us to map out the settlement pattern of these families after their arrival at the Establishments. Most of these properties are noted as being acquired by various means between 1832 and 1837. (ONTARIO HISTORICAL SOCIETY
Papers and Records Volume 3, Published in Toronto in 1901 Pages 123-166.) 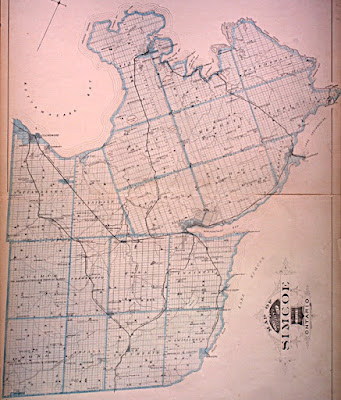 It is interesting to note that not all who arrived here, stayed here. Some returned to what was now US territory and others to areas around the Sault that had remained under British rule. Some went to points south like Holland Landing and even York (now Toronto). Others went up the shore to places like Byng Inlet and the area around Parry Sound. But most stayed around Penetang or at least in northern Simcoe County.

So now we can focus our search on north Simcoe. The records indicate that 40 plus families acquired Park lots that were, for the most part, on the west shore of Penetang Bay with some showing properties in what by 1840 was rapidly developing into the village of Penetang at the south end of the bay. But, where did the others go? Were there other Metis communities developing besides Penetang? 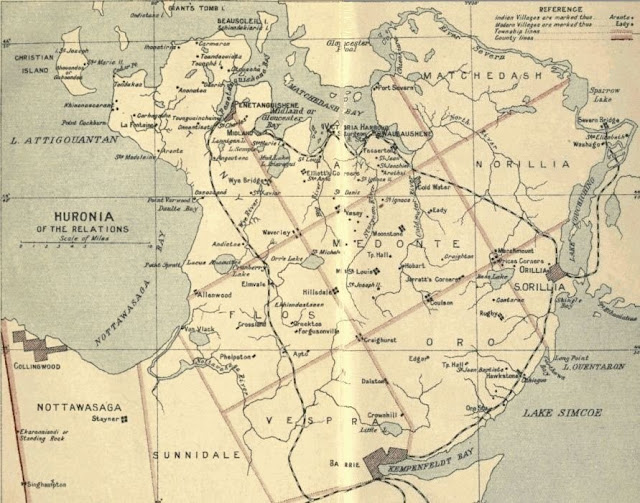 It is also clear from the record that some 11 families seem to have developed their homesteads close to the mouth of the Wye river on or close to the “old Fort”. This clearly references the ruins of Ste. Marie among the Hurons build by the Jesuits in 1639 and abandoned and burnt down in the spring of 1649. These families salvaged much of the stonework from this site and recycled it for use in their homes. One entrepreneur by the name of Baptiste Bruneau attempted to establish an organized subdivision of lots that became the first such plan to be registered in the township of Tay. Being close to the river mouth and bordered by what is now the Wye Marsh, this was prime land for those who wanted to continue in their lives as hunters, fishers and trappers.
The families that are recorded as settling at “old Fort” are: Bareille, Bellval, Bruneau, Fortin, Martin, Oreille, Quebec, Rondeau, St. Amand and Thibault. 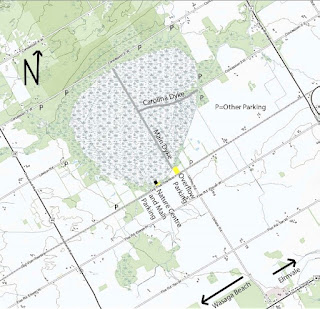 Another group of people who most likely shared the same interests as those on the Wye settled close to what the Huron/Wendat knew as Cranberry Lake, now known as the Tiny Marsh, on lots between the 1st and 3rd concessions of Tiny township. 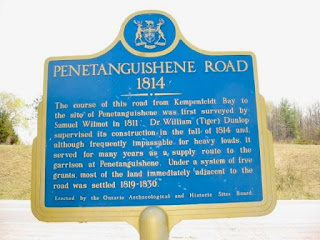 A few families appear to have acquired land more suitable to farming. Some of these properties can be found on lots that front on what was the military road, soon to become known as the Penetang road. This is now closely aligned with County Road 93 between Waverly and Penetang.

The family names who appears to have settled on the military road are Corbier, Corbière, Leduc, Legris, Vasseur.

Another few families went further east towards Orillia and settled on land on the shores of Matchedash Bay that would develop into the villages of Victoria Harbour, Waubashene and Coldwater. 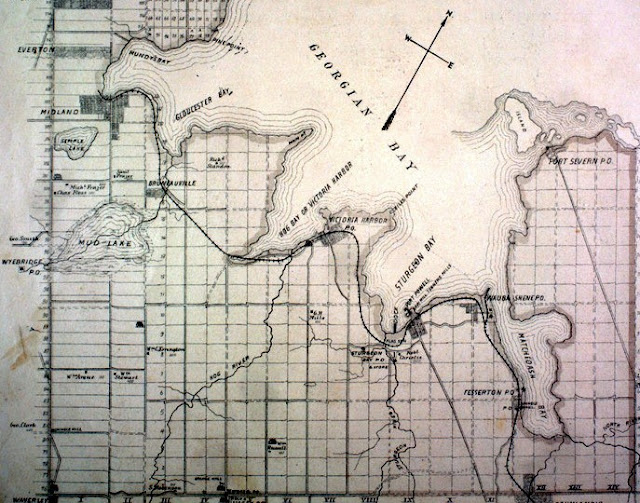 The family names of Metis who settled near the shores of Matchedash Bay are Barbou, Berger, Craddock, Deschambault, Dusang, Labatte, Paradis, Parissien, Prousse.

The largest group of settlers to seek out homesteads away from Penrtang Bay were those who acquired land on lots in and around St Croix, soon to be renamed Lafontaine. These properties were in the 15th, 16th and 17th concessions of Tiny township most of which fronted on what we now know as Rue Lafontaine between Simcoe County Road 6 and Cedar Point Road. 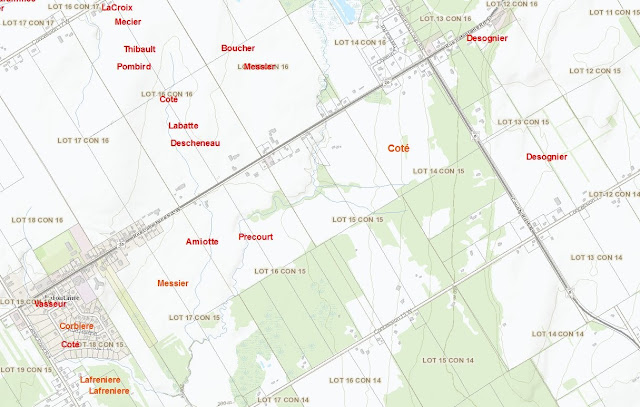 In addition to those families with homesteads associated with the village of Lafontaine there were also some outliers to the north of the village on the roads and trails leading to and on the beach of Thunder Bay itself. The only Metis homestead of that time that was built on the beach in 1834 was that of the Labatte’s. That family arrived in Thunder Bay by accident when they were shipwrecked on their way to Meaford. 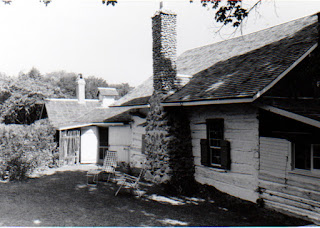 For more information on the Labatte homestead and the family who lived there drop into the “Labatte Homestead Rendezvous” Saturday June 22nd at the beach.

It should be noted here that the family names mentioned in this post come from the A C Osborne papers as the source document. I have been advised by a local genealogist that the Osborne papers should not be relied on as a reliable primary source. That being said, short of doing a full and conclusive genealogical search on each name in the list of Drummond Island Metis derived from the Osborne Papers and compiling a new list, the Osborne list is the only one available. So, for now, it is the list that I have chosen to work with.

Looking for info on the family name Sheffield in the Hillsdale area?

Question? Do the original ‘land grants’ for lack of a better word include any historical or genealogical information? My family line was Joseph and Marie Messier? I can’t find any birth or marriage info for either one.

The original land grants that I have seen do not give a lot of detail about the person awarded the the grant. They are awarded in the name of the male and may our may not included his marital or family status. They usually do include where they resided when they petitioned for the grant and perhaps their occupation and or military status at that time.
Some of the information that you are looking for would be more likely found in the federal census records but they don't start until 1851 from what I recall. That's why people turn to sites like Ancestry to fill in the blanks utilizing documents and records of other family's records.
Perhaps MNO have some of that info for those who applied for Metis status.
Good luck in you search.

Thank you John. Where exactly would I find such info. I was on Ancestry almost from the start and uploaded all info I had. Now on Heritage did the same thing. I’ve only come across 2 documents that wasn’t my info! I’m getting older and have serious eye problems… so simply can’t research for hours anymore. Any help to where I can find any land grant info would be greatly appreciated.

My search began with a study of the Osborne Papers that were published in 1901. The Osborne Papers are a collection of narratives collected by A. C. Osborne of Penetang obtained by interviews with some of the Drummond Islanders and their descendants. It is from this document and other records that a list of names of the Drummond Islanders has been obtained and here references are made to the places that they first settled their families. This documentation quite often includes the lot and concession number or other property location reference that allows us to map out the settlement pattern of these families after their arrival at the Establishments. Most of these properties are noted as being acquired by various means between 1832 and 1837. (ONTARIO HISTORICAL SOCIETY
Papers and Records Volume 3, Published in Toronto in 1901 Pages 123-166.)

I'm curious to know if there's a connection to the Magnetawan First Nation in Byng Inlet - two of great grands passed away in Byng Inlet (Pete Gendron came from Drummond Island and Marie Vallee (first husband Charles Vassuer then she married a Labatte)).